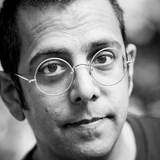 Physicist, journalist and best-selling author with the first book about mathematics to become a No.1 bestseller in the UK

After completing a PhD in particle physics at Cambridge, Simon Singh joined the BBC science department and worked on "Tomorrow's World" and "Horizon" — his documentary about Fermat's Last Theorem won a BAFTA in 1996.

In 1997 he authored Fermat's Last Theorem, the first book about mathematics to become a No.1 bestseller in the UK. Since then he has published The Code Book, Big Bang and Trick or Treatment? Alternative Medicine on Trial. He has written for several national newspapers and magazines. He was sued for libel by the British Chiropractic Association in 2008, and was vindicated in 2010. The resulting Libel Reform Campaign led to the Defamation Act 2013.

His latest book is The Simpsons and Their Mathematical Secrets.