Rutherford and Fry's comprehensive guidebook tells the complete story of the universe and absolutely everything in it — skipping over some of the boring parts. It's a celebration of the weirdness of the cosmos, the strangeness of humans and the very fact that amid all the mess, we can somehow make sense of life.

What follows is a collection of stories about how our senses deceive us, how reality is not quite what it seems and how science is the one way that we can understand this otherwise bewildering world. Our brains have evolved to tell us all sorts of things that aren't true: the world is flat, the stars are fixed in the heavenly firmament, a day is 24 hours, eating sugary sweets makes kids go nuts at parties. This book is crammed full of tales of how stuff really works. With the power of science, we have bypassed our monkey-brains and we're going on a journey from the origin of time and space, via planets, galaxies, evolution, the dinosaurs, all the way into our minds, with truly head-scratching questions that only science can answer.

Fermat’s Last Theorem is the most notorious problem in the history of mathematics, and surrounding it is one of the greatest stories imaginable. In 1997 Simon published his first book, a biography of this mathematical theorem. The book explains what the theorem is, who invented it and who eventually proved it. It also tells the fascinating stories of some of the other mathematicians whose lives were tormented by this beautiful and intriguing problem.

Getting involved in Fermat’s mischievous conundrum set Simon on the path towards being an author and ignited an interest in mathematics that has continued ever since. As a physicist, he was always interested in mathematics as a tool for studying the universe, but learning about Fermat’s Last Theorem taught him to love mathematics for its own sake. 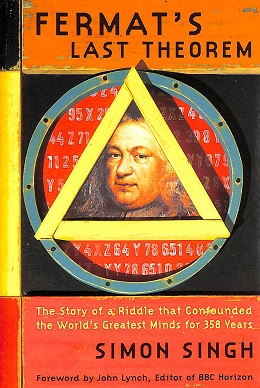